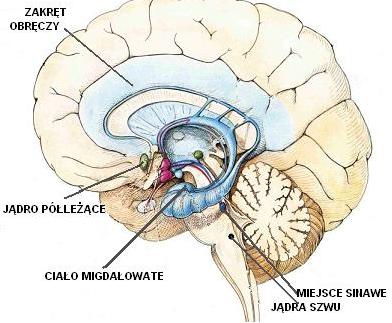 The two main biological systems involved in stress response, ie. the sympathetic system and the hypothalamic-pituitary-adrenal axis (HPA), I described in the article Biology of stress. Now a little bit more about corticoliberin, as well as the locus coeruleus in the brainstem, dopaminergic and serotonergic system and the amygdala, hippocampus and prefrontal cortex.

The stress hormone corticotropin includes, among others in the hypothalamus, where under stress is released into the pituitary gland, which activates the HPA axis. In addition to the hypothalamus, corticotropin-releasing hormone is inter alia in the frontal cortex, the cingulate cortex, the central nucleus of the amygdala, nucleus accumbens and the two parts of the brainstem: locus coeruleus and raphe nuclei. Its function is to activate anxiety behaviors, reduce behavior reinforced by reward and inhibition of appetite and sexual activity. In the brain, there are two types of receptors sensitive to corticotropin: CRH1 and CRH2. CRH1 receptors regulate the anxiety behavior and CRH2 – autonomic nervous system. The nature of receptors is probably opposite: mice lacking the receptor CRH1 are characterized by reduced levels of anxiety and lacking receptor CRH2 – increased.

Locus coeruleus is activated by physical stressors (eg. decline in blood glucose, blood pressure, blood volume, impaired thermoregulation) and the psychological stressors. It is connected to the hypothalamus, which activates the hypothalamic-pituitary-adrenal axis. At the same time, this axis activates the locus coeruleus. The neurons of the locus coeruleus also have responsibility for strengthening the anxious behavior by stimulating the amygdala and the prefrontal cortex inhibition. On the other hand, the moderate activation of certain noradrenergic pathways, makes locus coeruleus improve alertness and increase selectivity, eliminating the influence of distracting stimuli. Which of these mechanisms prevails depends on the activity of other neuronal systems, the type of stressor and stress response phase.

The dopaminergic system is responsible for many activities essential to cope with a stressful situation: regulates the emotional response, is responsible for the selectivity information processes and learning. In the central nervous system, there are three dopaminergic pathways: running from the substantia nigra to the striatum, midbrain-limbic and midbrain-cortical. An important role in the course of the stress response system has third pathway: running from the midbrain to the cortex (especially the prefrontal cortex, which is responsible for short-term memory).

Serotonin, produced by raphe nuclei during acute stress increases its activity in the prefrontal cortex, amygdala, hypothalamus and the nucleus ambiguus, located in the medulla. The role of this neurotransmitter depends on the area of the brain and serotonergic receptor that is activated. An important role in the stress response has 5-HT1A receptor that interacts with the glucocorticoid receptor. The disorder of this interaction may be a factor in causing depression.

An important role in stress play amygdala and hippocampus. The amygdala is responsible for emotional memory and is involved in recognizing the stressor and assigning emotional significance to him. Plays a role in behavior conditioned by negative emotions, especially fear. It interacts with the hypothalamus and locus coeruleus. Excessive activation of the amygdala, caused by the repeated severe stresses or chronic stress leads to inhibiting the hippocampus, having a very important role in the memory processes. The hippocampus is also involved in inhibiting the stress response, by inhibiting the secretion of corticotropin by the hypothalamus. Damaged by stress, the hippocampus however does not have such ability. Under the influence of an excessive amount of glucocorticoids, hippocampus triggers a cascade of glucocorticoids, which leads to the persistence of the stress response and its subsequent damage.

The prefrontal cortex is responsible for inhibiting or unlock subordinate evolutionarily older part of the brain. Its proper functioning ensures adequate recognition of the stressor, controlling stress reaction and maintaining the excitation caused by stress at an appropriate level.

The biology of stress 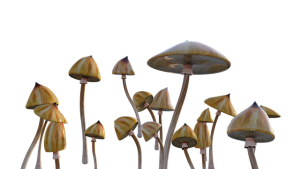 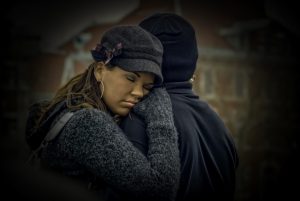 Infertility is not only a medical problem